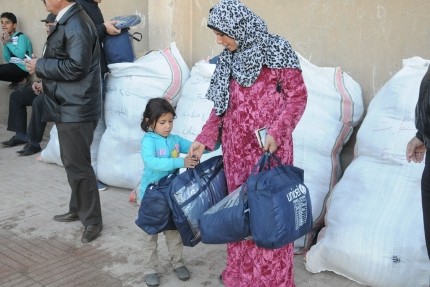 With 4 million Syrian children out of school, $1.4 billion sought by UN to save ‘lost generation’

2 February 2016 – With four million Syrian and host community children in need of education and no let-up in sight in the fighting tearing the country apart, the United Nations and its partners are seeking $1.4 billion at a major conference in London on Thursday to save the current youth generation.

“The scale of the crisis for children is growing all the time, which is why there are now such fears that Syria is losing a whole generation of its youth,” said UN Children’s Fund (UNICEF) Regional Director for the Middle East and North Africa, Peter Salama, whose agency is coordinating the ‘No Lost Generation Initiative’.

“As a result of all the work being done by partners and donors, education and protection for children are now being prioritized. But what we must see in London is the step-change necessary to bring all children back to learning; to protect those who are at risk of dropping out; expand safe and inclusive learning environments; recruit and train more teachers; improve the quality of education, and support the development of technical, vocational and life skills opportunities for youth.”

The London conference is being co-hosted by Britain, Germany, Kuwait and Norway, and leaders from more than 30 countries are expected to attend, with the aim of raising new funding to meet the immediate and longer-term needs of those affected by the crisis.

Nearly five years into the Syrian war, some four million Syrian and host community children and youth aged 5-17 years are in need of education assistance, including 2.1 million out-of-school children inside Syria and 700,000 Syrian children in Turkey, Lebanon, Jordan, Iraq and Egypt.

Last year, the combined efforts of Governments and international partners helped more than one million children and youth inside Syria benefit from formal or non-formal learning opportunities. But with no political solution in sight to one of the most brutal conflicts the world has seen in decades, the number of children missing out on an education continues to climb.

Governments at the London meeting will also be urged to put more pressure on parties to the Syria conflict and those who support them to end attacks on schools and other places of learning, in accordance with international humanitarian law.

According to UNICEF, the killing, abduction and arrest of students and teachers has become commonplace, as have arbitrary attacks on schools. About one in four schools cannot be used because they have been damaged, destroyed or are being used as shelters for the internally displaced or for military purposes.

The No Lost Generation Initiative was set up in 2013. By the end of 2015 1.2 million children and youth inside Syria benefitted from improved formal and non-formal learning opportunities and more than 650,788 in Egypt, Iraq, Jordan, Lebanon and Turkey received school supplies or support through cash grants.

GAIN IS COMMITTED TO HELPING 1,000 FAMILIES WITHIN SYRIA. OUR HEARTS BREAK WITH THE DAILY REALITY MANY OF THESE CHILDREN AND THEIR FAMILIES ARE EXPERIENCING.