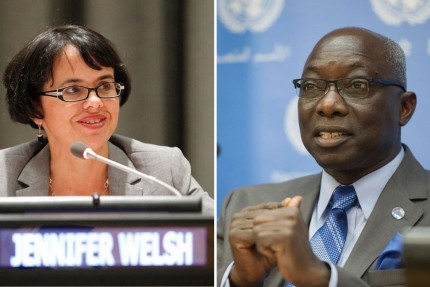 13 October 2015 – Senior United Nations human rights officials today expressed their alarm at the rise in violent rhetoric by influential religious leaders – including calls for “holy war” against certain faiths – in relation to the situation in Syria.

The UN Secretary-General’s Special Adviser on the Prevention of Genocide, Adama Dieng, and Special Adviser on the Responsibility to Protect, Jennifer Welsh, condemned the recent call by clerics in Saudi Arabia for Sunni Muslims and their States to support a “holy war” against Shia Muslims and Christians in Syria, as well as against States and non-State armed groups perceived to support them.

“Such rhetoric can aggravate the already extremely volatile situation in Syria by drawing religiously motivated fighters to join all parties to the conflict, thus escalating the risk of violence against religious communities,” said the Advisers in a statement, adding that “advocacy of religious hatred to incite or justify violence is not only morally wrong, but also prohibited under international law.”

Mr. Dieng and Ms. Welsh also expressed concern at reports that Russian Orthodox clerics had referred to the Russian participation in the conflict in Syria as a “holy battle” against terrorism, as “statements of this kind can be manipulated, feed suspicion and increase polarization of communities.”

The Special Advisers also noted the response by Russian authorities, who reportedly denied that there was any religious connotation to their involvement in Syria.

They praised the organization Syrian Christians for Peace for rejecting the concept of a Christian “holy war” and condemning those who invoke it.

The Special Advisers called on States to dissociate themselves from and condemn any form of advocacy of religious hatred, promote dialogue and protect and empower all those religious figures and human rights defenders who are working towards enhancing interreligious respect and harmony.

The officials also called on religious leaders around the world to refrain from any form of advocacy of religious hatred and incitement to violence, and to counter any use of such rhetoric, emphasizing that “religious leaders should be messengers of peace, not of war.”

“In situations in which tensions are high, as in Syria, religious leaders should call for and foster restraint and dialogue, rather than fanning the flames of hatred,” they cautioned.

If you want to read more about how GAiN is working in Syria, click here.