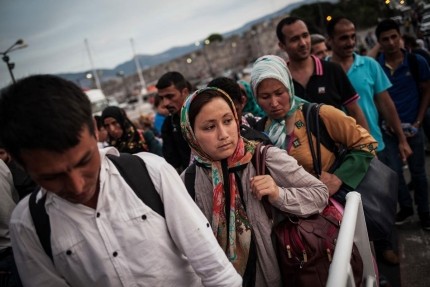 9 July 2015 – The exodus spawned by the four-year long Syrian conflict has now become the United Nations refugee agency’s largest crisis in almost a quarter of a century and risks deteriorating even further as fighting in the country shows no sign of abating.

In a news release issued earlier today, the Office of the UN High Commissioner for Refugees (UNHCR) confirmed the latest figures received from the field indicating that more than 4 million Syrian refugees have fled the Middle Eastern nation since hostilities began there in March 2011.

“This is the biggest refugee population from a single conflict in a generation,” lamented UN High Commissioner for Refugees António Guterres. “It is a population that deserves the support of the world but is instead living in dire conditions and sinking deeper into abject poverty.”

As it reaches the mid-point of its fifth year, the Syrian civil war has generated a steady outflow of refugees into neighbouring countries such as Lebanon, Turkey, Iraq and Jordan, burdening those countries’ infrastructures and leading to overcrowded settlements where many refugees struggle amid high unemployment and precarious services.

According to the latest data available, Turkey alone is host to over 1,800,000 registered Syrian refugees – more than any other in the world – with about 259,000 living in 23 camps set up and managed by the Government.

In addition, the numbers are only slated to increase amid intensified fighting across Syria, the UN refugee agency noted. Today’s 4 million milestone, in fact, comes barely 10 months since the total of three million was reached.

At the same time, however, life for Syrians in exile is becoming increasingly tough. The UN agency explained that some 86 per cent of refugees outside Jordanian resettlement camps live below the poverty line. In Lebanon, 55 per cent of refugees live in shelters considered to be “sub-standard.”

Meanwhile, in a recent report from the ground, the UN Children’s Fund (UNICEF) similarly warned that as the Syrian crisis has dramatically reduced family livelihood opportunities and impoverished millions of households in the region, children have been steadily pushed into the job market and are now being widely employed in harmful working conditions, risking serious damage to their health and wellbeing.

“Worsening conditions are driving growing numbers towards Europe and further afield, but the overwhelming majority remain in the region,” Mr. Guterres continued. “We cannot afford to let them and the communities hosting them slide further into desperation.”

While the conflict continues to push a steady outflow of Syrians across the region, the conditions of those trapped inside the country’s besieged cities remains equally dire.

The humanitarian impact of the crisis is only further compounded by funding shortfalls which has seen wholesale cuts to the UN’s delivery of humanitarian aid – from food assistance to lifesaving health services.