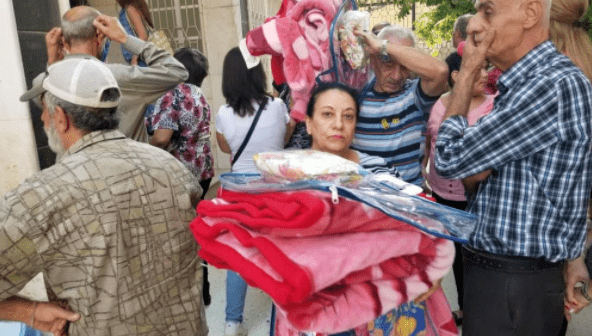 Kaiden* is a high school student. He lives with his family and regularly attends church meetings. His family is very poor and as the oldest son, he is working to help take care of them. Every summer, Kaiden works to help his family save money for the school year. His job is essential to him being able to continue his education.

The pressure and burden of having to help support the family is a lot for a high school student. When Kaiden heard that Global Aid Network (GAiN)’s partner, a local church in Damascus, provides Bags of Blessings (bags that contain food and non-food items for a family of five), he went to attend and ended up meeting Jesus. Today, Kaiden is growing steadily in his relationship with Christ.

GAiN has been involved in Syria since 2013, and has been working steadily with our local partner for eight years. Since then, tens of thousands of Bags of Blessings have been distributed and the gospel has been presented to 16,763 people – resulting in 5,992 people who have made the life-changing decision to follow Christ.

The Bags have helped to alleviate some of the burdens that Kaiden has had to carry for his family. With the provision of food and other items in the bag, Kaiden can put some more money toward his education and future.

Sahar* understands the daily struggle Kaiden lives with. She, too, had to overcome many obstacles in her life, including her father losing his job in 2016. Sahar has a brother with physical disabilities and has to work to provide food for the family. Currently, all of her salary goes toward rent for their apartment.

In 2018, Sahar’s father sadly passed away and they had no money for a funeral. When God provided the money from a church that had heard about her situation, Sahar then started to really think about Christ. When Sahar was invited to the church in 2020, she attended with caution. Brother Salih*, from the church, spoke with her and encouraged her to depend on God, who can provide for her needs. At the time, Sahar’s suffering had been so great over the years that she didn’t believe it would happen. Although she told Brother Salih that she believed and accepted what he was saying, in her heart, she didn’t feel it to be true.

After a few days, Salih and his wife visited Sahar. There, they had the chance to share the gospel with her, in which she accepted Christ as her saviour, through tears of joy. She also received a Bag of Blessing and was surprised that God knew exactly what her needs were. He had provided for her at the right time, considering she had nothing to eat that day.

Today, Sahar is a strong believer and shares the gospel with others, and attends a discipleship group.

Kaiden and Sahar are just two of the tens of thousands of people whose lives have been touched in some way since the start of the Bags of Blessings program, thereby revealing hope and restoring life to the people of Syria.

*Name has been changed for security purposes.

You could help families in need by providing basic food and non-food items, and at the same time help them know the hope and love found in Jesus.

Will you give today?