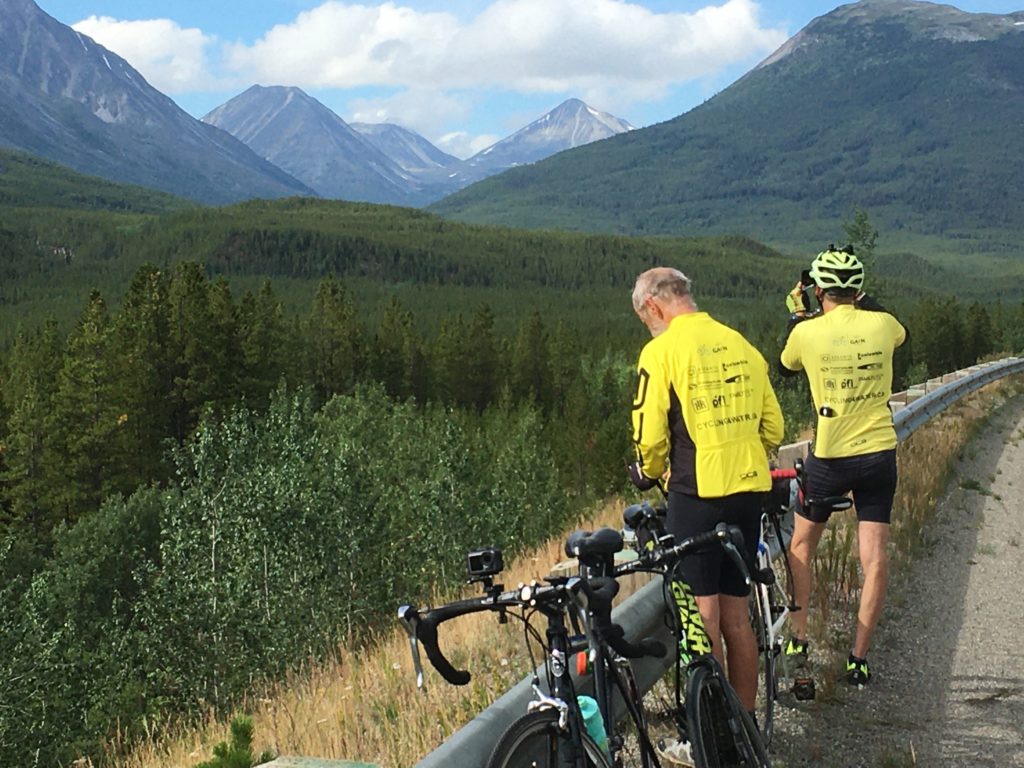 After two months of cycling through Canada’s diverse and picturesque landscapes – including the Rocky Mountains, flat prairies, hills in eastern Canada – the Cycling 4 Water team reached Atlantic Canada just in time for fall, completing their 65-day ride in Halifax.

The team, made up of a group of self-proclaimed young-at-heart old guys (Mike Woodard, Rob Montgomery, Timo Itkonen, Gabe McReynolds) and their “roadie” (Lyndon Dojohn), dedicated their summer to raising awareness and funds to provide access to clean water for rural villages in Africa. They set out with a goal to provide approximately 65 villages with clean water through GAiN’s Water for Life Initiative.

The statistic that every 90 seconds a child dies due to water-related diseases has been one that has kept the team going. “That’s a statistic that gripped my heart, all of us being fathers and grandfathers,” Mike told the Standard-Freeholder in Cornwall, Ontario. “There’s nothing more basic than water – if you don’t have water you die. A well transforms a village. It changes the whole dynamic and the health. It allows kids to go to school because they aren’t sick.”

This has been the biggest motivator for the cyclists, who rode through Canada’s varied weather, including forest fire smoke, strong headwinds, hail, and heavy rain.

“The highlights of the trip have been the struggles that God has brought us through,” Lyndon, who drove the RV and is also the church partnership director for GAiN, shared. “Across the prairies and Northern Ontario, the weather wasn’t that great. [There were] a lot of headwinds for the cyclists. Major days of rain, all day, when they’re out on the road.”

The team also came across some literal roadblocks, with construction and non-access roads. This meant that they had to re-route, adding more kilometres than planned, on paths that weren’t as great.

These weren’t the only challenges. The team faced some setbacks as individuals. Near the beginning of the trip, Gabe got news that his mother-in-law had passed away and had to fly out of Whitehorse to be with family in Ottawa. The team rode on as a trio, but about a week later, Gabe was able to rejoin them in Prince Rupert.

Not too long after, on day 11, Mike fell while on the road, fracturing his pelvis. After a visit to the hospital in Stewart, BC, Mike took a day off and the team made adjustments to the schedule due to the detour. Unfortunately, a few days later, in Terrace, BC, Mike had to be readmitted to the hospital due to some internal bleeding from his fall. Thankfully, he was able to rejoin the team just a couple of days later, catching a flight to Prince George.

That wasn’t the only injury on the road. Just two days after, Rob started experiencing a sore ankle, requiring him to take a few days off before getting back on the road.

This year’s 10,000-kilometre event was initially scheduled for June 2020, but was postponed due to the COVID-19 pandemic. While the Sea 2 Sea 2 Sea ride was finally able to get moving this year, it didn’t come without some challenges.

Travel restrictions in the North West Territories back in July meant that the plan of starting the ride in Tuktoyuktuk could not happen. Instead, the team started the ride from Dawson City, BC, still as enthusiastic as ever.

Despite all of the obstacles, the team was determined and committed to the cause. As a result of their perseverance, as of today, they have raised enough to provide access to clean water to approximately 65,000 people!

Overall, the team is thankful that they were able to do this ride across Canada safely during the pandemic, while also meeting with generous strangers and friends, old and new. Along the way, they had the pleasure of visiting churches in different provinces to share about their ride and their reason for doing it. They were blown away by the unexpected generosity of the people they met.

One of many memorable stops was at The Life-Spring Church in Ontario. The church pledged the amount of a well and had the children make a symbolic cheque to present to the team.

“Clearly, the highlights were in the churches on Sundays where people showed so much interest,” Lyndon shared. “The surprises were when some guys would just come up and cut a cheque for a complete water well. I don’t know how many people come to church thinking they’re going to do that. I don’t want to give the impression that it’s just those people who [matter]. Anybody who gives is a joy. Sometimes, [even if] it’s a small amount, you can tell that they’re giving it because they feel led to give.”