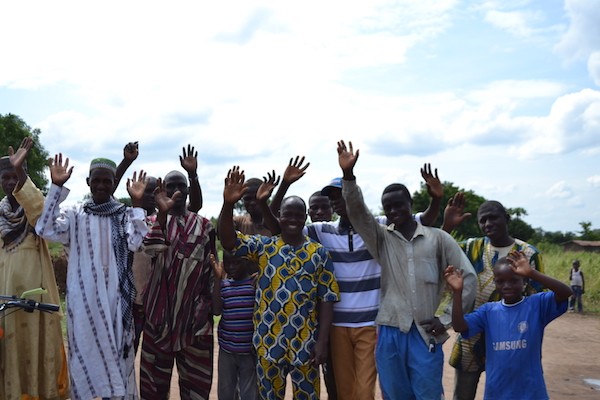 When we arrived to the village of Achechigon, Benin, we were surprised not to see a traditional hand pump in the village. Instead, we saw this imposing concrete structure with a window on its side, two spouts coming out at the top front and two taps at the bottom.

There were a handful of people lining up and getting ready to collect water from the building.

When we had arrived, they were just about to divert one of the taps to fill some drums for a herd of cattle to drink water.

When we provided the well, the community at Achechigon wanted more than just a hand pump, they wanted something that would ease off the burden of fetching water. They were inspired and envisioned a water tower for the village, as it would be the easiest way to get clean and fresh drinking water for everyone.

The community started to research and gather information on the best available technology for a water tower. Little by little, they started to purchase each component necessary to build the tower. They recruited some locals to construct it, including one of the villagers who was a local mason. Together, the community brought their best skills forward to build a tower.

Not only did the community work together to build it, they also pulled together the finances – 2 million CFAs (over $4,000 CAD) – in order to make the building project a reality. There were more than 1,000 people living in the village and the demand for clean water was massive. They understood the need for clean water and were happy to pay for it, knowing that the money would go toward maintaining the water system. This includes putting money toward diesel or parts to repair the generator.

The community sells water for 25 CFA ($0.05 CAD) per jerry can. Part of the monthly revenue goes toward employing an attendant who ensures that people pay for the water they receive. The current balance, after four months, is about 120,000 CFA ($263 CAD) in their village bank account.

Every Sunday, the committee meets to talk about management and operational issues regarding the well. The current ‘hot topic’ was the water packing issues.

A villager said, “This clean water simply transforms our lives. Every tribe in the area, including animals are just so happy that the water well is here.

Other people are suffering and depend on us! We must keep the water tower running. I don’t want to see other people suffering.”

There used to be just one well down the road with a foot pump. Men and women used to fight frequently because of the long wait time.

“We like to take this preciously,” said one of the villagers, after noticing the benefits of the well would be easier and faster access to water, which would promote peace in the household.

The difficulty of not finding clean water to drink had forced many to leave their homes and move to other places to settle. The culture in Achechigon is not nomadic, so one could imagine how difficult it must have been to move. With the water well in place and functioning in the village, families no longer had to make this choice. In fact, village life was being invigorated as more people were choosing to settle in Achechigon.

Every person our team talked to showed great appreciation and thankfulness for the well.

Today, their desire is to see this project replicated in different parts of the village and different parts of the district. This is a great example of  how villagers view the water well as more than just a water point — it’s aspirational. Villagers are inspired and motivated to find the best solutions on their own. They all have a sense of duty to ensure that the well is working so others can also enjoy clean water.

The tower was designed with the users and management in mind, to improve the convenience of fetching water. Having the reliable water source is a great indicator that sustainable water service will continue in the village.