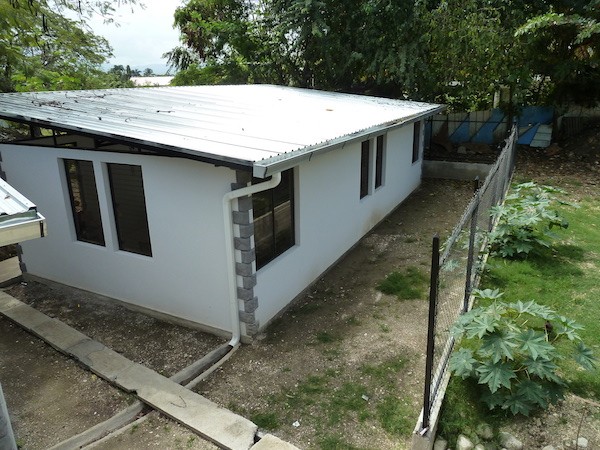 It’s been more than six years since Haiti was hit with a 7.0 magnitude earthquake on January 12, 2010. About 316,000 people were killed, one million people lost their homes and 100,000 children became orphans. The living quarters of Ca-Ira Children’s Village, an orphanage on the coast of Leogane (the epicentre of the quake) was shaken to the ground – resulting in the death of five orphans and two staff.

After providing emergency relief and running medical clinics with volunteers during the first six months after the earthquake, we decided to get involved in reconstructing Ca-Ira, knowing that it would be a long-term project. This initiative was led by GAiN Germany with support and contributions from other GAiN offices.

We played a key role in not only providing funding but also sending in staff and volunteer LIFE teams 2-3 times a year to help with the reconstruction efforts. As of April 2016, we sent a total of 19 LIFE Teams (180 total participants) to Haiti since the earthquake. This includes volunteers who were involved in emergency relief, as well as construction.

Our Project Associate Sam Bechard first visited Haiti with a LIFE Team in 2012 and the country was still in crisis mode – even two years after the earthquake. “When we drove outside, we saw house after house underground. We still saw the devastation and the suffering on the faces of people. They lost family members, a few staff and children. They couldn’t talk too much about the earthquake at that time – it was too fresh. They were [still] in shock and in survival mode.”

At the time, there were just temporary structures built since the earthquake: a temporary kitchen with a roof, put together from a few pieces of wood; a tiny, crammed room that served as a temporary dorm for 30 kids; a church without a roof; and a temporary bathroom. Reconstruction for permanent buildings had just started.

Fast forward to 2016 and a few new buildings have been completed: a new girls’ dorm and boys’ dorm, a guesthouse and kindergarten buildings.

Hardworking local teams, LIFE team volunteers from various GAiN offices, and even former children from the orphanage helped in the construction.

In January 2016, an opening and dedication ceremony was held to celebrate the completion of the kindergarten. Staff and children from the Ca-Ira, as well as delegates from the US and GAiN Germany were in attendance.

The children now have a safer learning environment – a major upgrade from the old, tiny, moldy shack that served as a temporary learning space. The new kindergarten is made of two buildings, which consists of three classrooms and two teachers’ rooms. The buildings are brighter and more spacious (96 sq. m, compared to the 15 sq. m shack) and were designed to cool down temperatures and reduce the amount of mosquitos in the building.

While reconstruction is a priority, we recognize the importance of not just rebuilding the structures that collapsed, but also rebuilding the community by investing in the education and development of the children.

For the past three summers, our LIFE Teams have been running a children’s camp for two weeks for children in the orphanage and surrounding community. Kids get to participate in Bible lessons, worship services, arts and craft stations and team games.

It’s also at these summer camps that some of the older kids from Ca-Ira get the opportunity to practice their leadership skills and become role models to younger kids. This group of young leaders, in their early to midteens, are called the Battalion. GAiN has been involved in training these kids to develop their skills in areas such as leadership, sharing the gospel and public speaking. Bechard has seen significant growth in these kids, including their involvement in the kids’ camps, outreach projects, community service, and setting up for screenings of the JESUS Film.

Some of the Battalion kids grew up in Ca-Ira decided to stay after graduation so they could use their skills to give back to the community that played a part in their upbringing.

Our work at Ca-Ira also extends into serving the surrounding community. One of those ways is distributing small food packages to families in the Ca-Ira community, surrounding the orphanage. LIFE teams join members of the local church, along with a translator, and hand out packages of food containing practical items such as rice, oil, sugar and salt.

“The packages aren’t large, but they are enough to be a helpful blessing to families in the area that are struggling to provide for their families,” explains Lindsay Schacter, LIFE Teams Manager. “Oftentimes, the teams are able to visit some of the same families previous teams have visited, providing an opportunity to build ongoing relationships between our team and the Ca-Ira church with community members.”

Another way that we are investing in the community is through community health programs and medical clinics.

We run mobile medical clinics onsite at Ca-Ira, giving the children an opportunity to see a doctor. In 2015, nurses were able to perform a basic health check on all the children at the orphanage.

“From running mobile clinics in various locations in Haiti over the past five years, we learned early on that one of the greatest needs in the area of health was not for clinics, but for basic health education,” says Schacter. “Mothers especially desire to care for their children and give them the best start in life but are often ill-equipped to care for them both through a lack of access to health care, but also simply through a lack of understanding about topics such as hygiene and sanitation, nutrition and the spread of illness.”

In 2015, our LIFE Team hosted community health education on different topics. There were training sessions for orphanage staff and an open session for members of the community, where they could learn and ask questions.

While a lot has been done, Schacter and Bechard acknowledge that there is still a lot of work to do in Haiti, the poorest country in the Western Hemisphere. But they are hopeful for the future after looking back at how far the orphanage and the people in the surrounding community have come since the earthquake.

“When I look to the future, I see our local staff and children becoming key leaders in the community,” says Bechard. “I remember when we planted some mango trees on the ground, around the building. After a few years, they are now growing and bearing fruit. [In the same way,] we started from nothing and needed to rebuild everything, but now our work [is bearing] fruit. We’re building a future where they had no hope. The children can now focus on their school, focus on playing music and dancing. They are back to being children, living in security, playing without fear and smiling like never before. They have a home.”