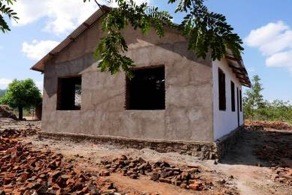 The village of Namauni, located in Tanzania, was able to build a teachers house at the school with the coming of the deep-capped water well.

The school and teacher’s buildings were constructed with small clay bricks, but there were no water sources anywhere near the school, which made construction difficult and costly.

With the well nearby, the construction of the buildings was made much easier. In fact, the well brought down the going cost of bricks from 50 Tanzanian Schillings apiece to 30 Tanzanian Schillings apiece, all because water was readily accessible to make the bricks. The village also expects a housing boom in the near future, in large part because there is a nearby source of clean, disease-free drinking water. Having a nearby source of water will also increase the productivity of needed bricks.

Perhaps the greatest impact is in the lives of the children; particularly the girls. Instead of using valuable time to collect water, they can now spend that time at school getting an education as well as in other village activities.

WOULD YOU LIKE TO HELP OTHER VILLAGERS EXPERIENCE THE SAME TRANSFORMATION IN THEIR VILLAGE?