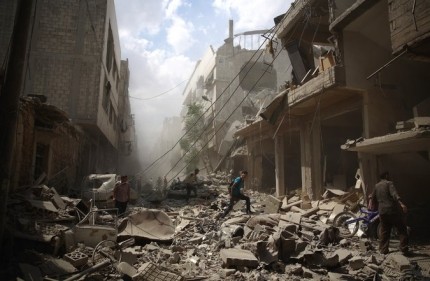 For those who remain in Syria, daily life is a nightmare

BEIRUT, Lebanon — Every morning, at the dawn call to prayer, women and children move silently from the Damascus suburb of Douma to the surrounding farm fields, seeking safety from the day’s bombardments by the Syrian government.

The walk is part of a surreal routine described by the fraction of Douma’s residents who remain: shopping on half-demolished streets, scavenging wild greens, carrying out mass burials. But not even the fields are safe; recently, medics said, bombs killed two families there — 10 people, including seven children.

As crowds of Syrians transfix the world with their flight to Europe, this kind of life is one of the many nightmares they are fleeing. They leave behind increasingly empty neighborhoods — from the Damascus suburbs to the northern city of Aleppo — that testify to the scale of their exodus.

Such bombardments have been going on for years in insurgent-held areas like Douma, one of the first areas to revolt against the government in 2011. And yet, the situation can still get worse. The past month in Douma made that clear.

Government forces began a barrage even more intense than usual, using not only the artillery shells that Douma has come to expect, but also airstrikes. Perhaps four out of five residents had already fled what was once a bustling community of around half a million, and emergency workers say the new bombings drove out thousands more.

More than 550 people, mostly civilians, have died in the past month in Douma and nearby suburbs, 123 of them children, Red Crescent medics say. August was one of the bloodiest months in the district, with at least 150 trauma injuries being treated each day from Aug. 12 to 31 — a number that includes only patients from 13 makeshift clinics that work with Doctors Without Borders.

Such concentrated violence has shaken even the most steadfast holdouts, said Ahmed, a Douma resident and a paramedic in his 20s who asked to be identified only by his first name for his safety. Of those who remained in early August, half have fled, he said, while the rest trek daily to hide in the fields or stay “trapped at home, praying they won’t get killed.”

As international focus has shifted to the Islamic State’s highly publicized violence and the threat it poses beyond Syria, less attention has been paid to the original struggle between President Bashar al-Assad and the insurgent groups that rose up after the crushing of a protest movement in 2011.

But that earlier conflict was driving people from their homes long before the Islamic State existed in its current form.

Advocacy groups for the Syrian opposition, as well as international watchdogs like Human Rights Watch, have long contended that the security forces’ bombardment of insurgent-held areas like Douma takes the largest toll on civilians, killing far more people than the Islamic State. Although no definitive numbers exist, a tally by a Syrian civilian opposition group, the Violations Documentation Center, said that 18,000 had been killed by airstrikes, which only the government has the ability to carry out, and that more than 27,000 had died in shelling and rocket attacks by all sides.

The Syrian government says it is bombing terrorists.

Douma, like other poorly served cities around Damascus, rose up early, and many there took up arms. It is now a stronghold for the Army of Islam, an insurgent group. The Nusra Front, Al Qaeda’s arm in Syria, is also active there, while the Islamic State is not known to play a role.

Insurgents also use indiscriminate tactics. After the new wave of attacks in Douma, they shelled Damascus, killing at least 20 people, according to death notices on pro-government websites. No one claimed responsibility.

But in terms of scale, the government’s bombing of rebellious areas is on another level. It has laid waste to large sections of central Homs in western Syria, Aleppo and the Damascus suburbs. In Aleppo, the weapons of choice are shrapnel-packed barrel bombs, unguided and dropped from helicopters.

In the past month, more than 450 civilians died from government bombings in East Ghouta, a semicircle of opposition-held working-class towns around Damascus, according to lists kept by the local branch of the Syrian Arab Red Crescent. Many of the victims were in Douma, the group said, including elderly people, women and children.

But it is not just bombings that deform life in Douma. Years of government blockades have forced residents to depend on tunnels and smugglers for daily goods. Humanitarian aid is largely blocked, and few people can get in or out.

Government and opposition fighters alike take their cuts of bribes and smuggling revenues. Some insurgents act as warlords, enriching themselves and cracking down on dissent. The human rights lawyer Razan Zeitouneh and other secular opposition activists disappeared from Douma in 2013, believed to have been kidnapped after criticizing the Army of Islam.

So escape means dealing with smugglers and new risks, even for those who have no plans to take a boat on the Mediterranean. It begins from the moment of leaving one’s own block, on the way to Damascus.

“It’s completely normal for people to wish they can go overseas,” Ahmed, the paramedic, said. But, he added, “Can they?”

Those who do reach Damascus — joining seven million Syrians displaced within the country — can be harassed or even arrested by security forces suspicious of people from opposition areas.

That drives many to Lebanon, Jordan or Turkey, which host most of the four million Syrians officially registered as refugees abroad. The Damascus suburbs have hemorrhaged 165,000 people to Lebanon alone. But those countries have become less hospitable, with residency crackdowns and shrinking benefits. So refugees can go further afield, including to Europe. Or they can go back to Douma, and to a war that has killed a quarter of a million Syrians. Because of the siege and restrictions on journalists by combatants, life there can only be glimpsed on videos posted by insurgents, anti-government activists and rescue workers. They show streets engulfed by uneven piles of brick, rooftops tilted askew and steel reinforcement bars pulled apart like spaghetti.

In one recent clip, a volunteer — perhaps a teenager — slung over his shoulder the limp body of a small boy. In another, a slight youth dug a ragged, bloody corpse from under rocks until a voice behind him says, “Don’t film the body. Enough.”

Often, amid the search for survivors, there is no sound but the crunch and clink of rubble, and residents manage to utter just one sentence, “God is greater.”

“Neighborhoods fell on the heads of the residents,” Imad al-Din, a Douma resident, said recently over Skype. “The screaming can still be heard.”

“Black Sunday” is what Douma residents call Aug. 16. At least 122 people died in one of the war’s deadliest air attacks, on a vegetable market, according to rescue officials, the Syrian Network for Human Rights and other monitoring groups.

Bilal Abu Salah, a resident who left the market just before the strike, is haunted by the faces of the pushcart vendors who sold him cucumbers, zucchini and eggplant. Minutes later he saw one covered with blood; one died, two were seriously injured.

Dr. Adnan Tobaji operated in a makeshift basement clinic, sometimes on the floor, without anesthetic or sterile supplies. Shortages could be deadly, he said. One woman died waiting for a blood bag to arrive.

Douma’s free fall has prompted Dr. Tobaji and several hundred colleagues and residents to sign a petition calling for a complete humanitarian truce, hoping it spurs talks and ends the war.

The call is striking coming from rebellious Douma. It sets no preconditions for the fate of Mr. Assad, long a sticking point.

“The fate of Assad for us is nothing compared to the fate of Syria the country, the people and the children,” Dr. Tobaji said. “At this moment while we are talking a Syrian is being killed. We need a solution by any means to stop the fighting.”

The solution, he added, “might not suit me or many other people but it’s not for me or for this or that person. It’s for Syria.”

GAIN IS PROVIDING AID TO SYRIANS WHO ARE DISPLACED WITHIN THEIR OWN COUNTRY. CLICK HERE IF YOU WOULD LIKE TO KNOW OUR RELIEF EFFORTS.