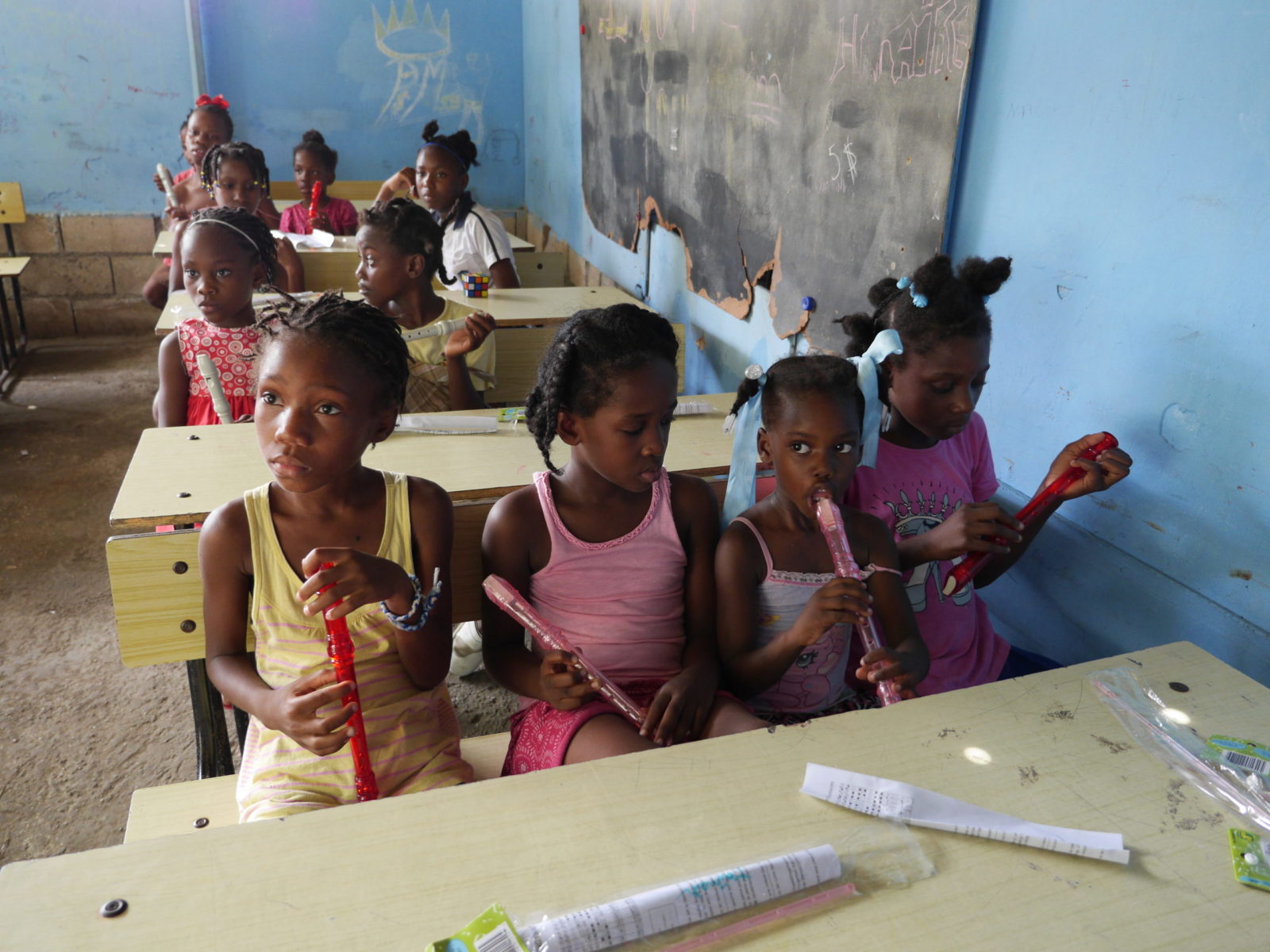 Haiti has had to endure back-to-back natural disasters, leaving people displaced, without food, water or shelter. The 7.2 magnitude earthquake struck on August 14, 2021 and Tropical Storm Grace swept the area just two days after, adding to the hardships of those already displaced. More than 2,000 have been reported dead, about 12,000 are injured and entire villages have been completely destroyed. These disasters came at a time when the country was already experiencing political instability and an increase in gang violence.

We are working with a local church partner to provide immediate relief to families in need, through relief packages. This includes water, food, medicine, and temporary shelter materials.

Will you help us bring hope and protection to those who need it most?

Situated on the coast of Leogane, Haiti exists Ca-Ira, an orphanage known for pouring out love and care for orphans and children from impoverished families. For years, this orphanage has saved countless children from starvation, sexual abuse and the lies of voodooism. Yet, on the 12th of January, 2010 Ca-Ira experienced a major setback to their mission. The two-story building that housed the living quarters for the children was completely destroyed by the destructive earthquake, killing five orphans and two of the orphanage staff members. The school center and the church that sheltered 220 pupils and 20 teachers also collapsed.

Today, the center has 75 children and 15 staff members. It is temporarily housed outside of Port-au-Prince in Tabarre, on a small property which has been given to the orphanage for two years. The girls sleep in a small 50m2 temporary wood shelter. The boys and members of staff are living in tents. In total, the property on which the orphanage is currently situated is less than 90m2 and lacks proper sanitation facilities. To help Ca-Ira return to the hope they once brought the children, we partnered with the orphanage to reestablish a children’s village where

“Our vision is to build a place for children where they can afford to be just children. We want to heal their sad pasts, and this goal can be accomplished by providing for their present and investing in their future,” shared Raphael Funk – COO of GAiN Germany.

Re-establishing Ca-Ira’s children’s village will take years. But, since approximately 1,000 people directly benefit from this center as well as thousands of others living in the surrounding community! Removing the burden of paying for education increases the number of poor children who attend school, helping to break the poverty cycle. Improving health services and nutrition will help mitigate the impact of HIV/AIDS and preserve human resources for the development of the country. Enabling widespread employment and training will help break the cycle of poverty. This is indeed is the long-term vision of the Ca-Ira Children’s Village. Children that used to be the hurting, vulnerable and needy will some day be the ones to bring about a change in their families and neighborhoods and start shaping a new Haiti.

On October 6, 2016, Hurricane Matthew hit the news. Unfortunately, Haiti who was still recovering from the catastrophic 2010 earthquake was hit the hardest.

The storm killed nearly 900 people. Thousands were displaced. More than 300,000 people are in shelters across the country, the United Nations said.

Mourad Wahba, the UN secretary-general’s deputy special representative for Haiti, described Matthew as the “largest humanitarian event” since the earthquake. The devastation was especially brutal in southern Haiti, where winds of 125 mph (200 kph) destroyed homes, flooded villages and cut off the island from the rest of the country.

In coordination with our GAiN Germany office, we also provided aid to those affected. We focused on both providing and distributing emergency food parcels (containing rice, oil, fish, spices and drinking water) to the community surrounding the Ca-Ira Orphanage. Ca-Ira, which is located in Leogane (the children’s village that we’ve helped rebuild since the 2010 earthquake).

In Haiti, a country that has endured years of devastation and suffering, children are quite often the ones who are affected the most. Approximately 38% of the Haitian population is under the age of 15; 50% of which are malnourished and do not attend school.

With a deep dependence on others, these children share the need for physical, emotional and spiritual care. As a result, we came alongside their local partner, to help build into the future of hundreds of children.

Located in two rural areas of Haiti, are schools totaling 360 children that find themselves in difficult and often hopeless situations. Some of the parents are so poor that they can’t afford to feed their kids and won’t send their hungry children to school. Whereas other children, regardless if they have any food in their stomach, still walk several miles every day to get to school because they have a dream for their life and want to learn. However, even after walking for an hour or so and with no food to replenish their energy, their education is still hindered.

One grade four teacher shared, “I realize that after ten o’clock in the morning the children have no energy left to learn and no matter how hard we try to retain the attention of the students, the kids don’t seem to listen or understand. For me… this feeding program needs to be implemented immediately.”

With the desire to see the 360 children receive a daily meal, an agreement was made to help GAiN’s local Haitian partner start a feeding program.

As the poorest country in the western hemisphere, Haiti suffered from a lack of safe drinking water, access to education, basic hygiene, and the skills to become self-dependent.

In 1997, the village of Chambrun was home to 3,703 people. At that time, due to influx of people seeking a source of income, the population had ballooned to over 12,000. This placed an even greater strain on existing natural resources and Haitian villages like Chambrun which was plagued by on-going needs.

With a national unemployment rate over 65%, an average age of 18 years, and an AIDS growth rate spiralling out of control, needs relating to youth development had been acute.

As a result, in partnership with CCC-Haiti, we were actively involved in relief and outreach efforts since the summer of 2004, when flooding devastated large regions of the country. On-going relief efforts continued through efforts like the Mapou Rehabilitation Project, the Fonds Verettes relief effort, and plans were under way for a community development project in the village of Chambrun; 30 km north-east of Port-au-Prince.

In the week of May 24th, Caribbean storms dropped six feet of rain in a few days. These rains triggered huge, fast and very destructive floods in the southern hill country.

The statistics from the U.N. at that time were:

The crisis was made far worse because Haiti is a country ill-equipped to manage daily life, much less this disaster. Just three months prior, a provisional government took power when President Jean-Bertrand Aristide was ousted. The new administration is broke and unable to effectively respond to this disaster.

Relief efforts were swift but agencies were being severely hampered by the lack of access. Many flood-hit towns were impossible to reach except from the air. And continuing rain has hampered the access even of helicopters. With clean drinking water at a premium and the widespread rupture of sewage lines, and many corpses in the water, authorities said there is the added worry of epidemics. The spring rains were far heavier than usual. Both Haiti’s deep poverty and unstable politics complicated the country’s ability to recover.

Report from The Field

The village of Fonds Verettes is situated at the base of mountains along a river. Heavy rains fell for 10 hours last week and the flood waters were so powerful and so destructive that everything they touched was destroyed. 21,000 people were left homeless. Almost 1000 dead, hundreds still missing. “It is a catastrophic situation.”

The need is unprecedented. The survivors are destitute, they have absolutely nothing. They need food, clothing, shelter, clean drinking water. They are also all in state of shock and mourning.

Esperandieu is working with pastors and leaders in the local churches to coordinate a quick response to the crisis.

The focus of us and Campus Crusade for Christ was to the villages of Mapou and Fonds Verettes.

150 families in 3 villages of Fond Verettes received aid on June 19, 2004. Each family was given a 50 pound bag of rice, a gallon of cooking oil and 9 bars of washing soap, plus the equivalent of US$8.00 to purchase other items they require to cook meals. The rice given was guaranteed to feed a family for at least 2 weeks. Distribution took place in local churches where the coordinator from the Civil Protection Office commented afterwards, “this was the best distribution that ever took place since the disaster hit Fond Verettes.”

Lost, vulnerable, helpless, desperate—if you are a Haitian right now, this is how it feels. First you took shelter in your house, trying frantically to save some of your things and keep your family around you in the chaos of the rising water. When parts of your house give way and crumble, you’re exposed to the driving wind and pelting rain. You drop what you’ve picked up to save, and grab your family members instead and try to stay together, fighting the raging surge of water that would sweep you away. Much later, after the wind and rain die down, you realize that your home and few belongings have been swept away by the surging waters. Muddy brown water and rooftops are all you can see. You are exhausted, hungry and thirsty…and so is the rest of your family. You have nowhere to turn!

People in Haiti have had to live through this reality three times this month. They had no warning, because in most of Haiti there is no electricity, and most people have no phones. There is no emergency evacuation system. The UN and Haitian government sources report that over the past three weeks, hurricanes Fay, Gustav and Hanna have killed more than 475 people in Haiti. This has caused serious flooding and put as many as 800,000 in need of help. The Public Health department has not been able to access the flooded areas in order to evaluate potential problems for epidemic outbreaks. Relief agencies are trying to help, but conditions are challenging as the water has destroyed bridges and caused landslides which hamper rescue operations. Some of the worst affected areas are in Gonaïves, Cabaret, Hinche and Jacmel. The port city of Gonaïves has been turned into an island, stranding residents who can do nothing but wait for help. Access outside Gonaïves to other areas remains virtually impossible.

Hundreds of Haitians in flooded areas have lost everything they owned, and in many cases have lost family members. People are in shock, unable to process what’s happened to them. In Cabaret, one grief-torn woman, upon finding the lifeless body of her 7 year old daughter in the water, pleaded with photographers recording the general devastation to take a picture of her – “I’ve lost everything! If you take a picture of her, I’ll be able to see her even after she’s buried.”