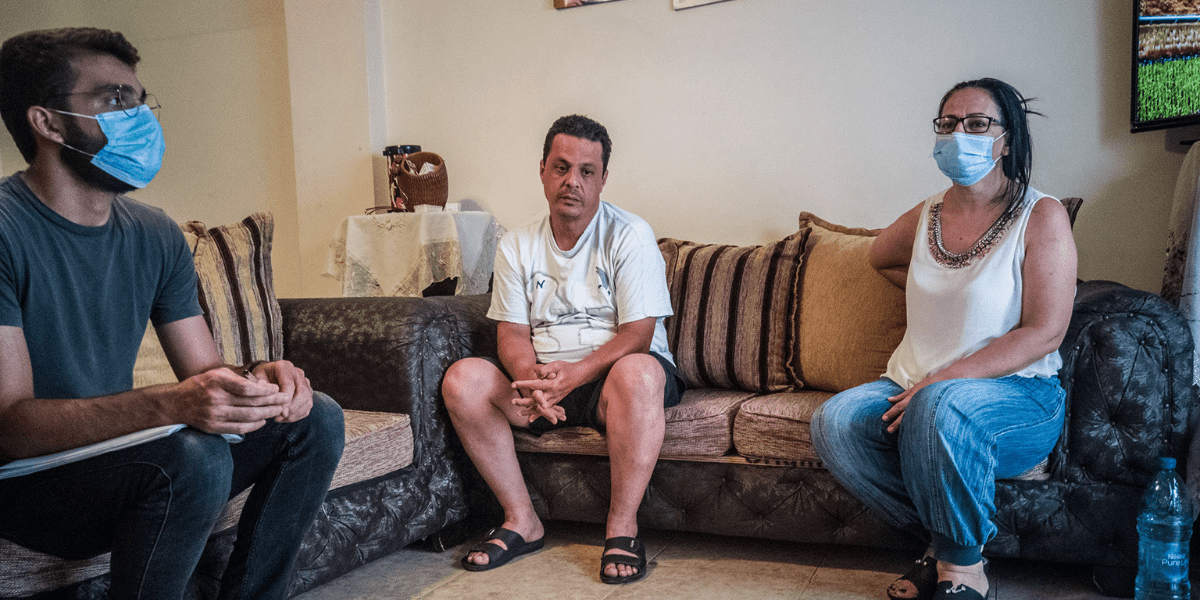 After the Beirut explosion on August 4th, our local partners in Lebanon formed a team to help coordinate cleanup and repairs efforts. Six staff, 11 interns and disciples, and several volunteers joined the effort to visit homes, churches, schools and hospitals to help with cleaning and clearing the glass and rubble caused by the explosion. The team was able to join in the efforts to clean 120 homes, two schools, four churches and one hospital.

They did a field survey of homes affected by the explosion and assessed ways they could help the affected families. The needs varied from urgent repairs to walls, doors, windows, glass replacement, replacement of appliances to personal needs like food, medicine, elderly and baby care products. Teams were divided into smaller groups that went back to these homes to bless families by helping provide some of their needs.

They met Anna through a referral by a family that we were helping. Anna is a single mother who raised three boys on her own after her husband left them. She used to work at a school selling snacks and cooking for elderly people around her neighborhood. After the Lebanese Revolution started in October and the COVID-19 lockdown happened in March, she lost her job at the school due to school closures.

As if that wasn’t enough, she also lost her job cooking for the elderly after their families requested she stop to prevent possible spread of the virus. Anna was left without a job and has since struggled to afford food for herself, leaving her going to bed most nights on an empty stomach.

Then the explosion happened and Anna was left devastated and lost hope completely. When our team showed up on her doorstep with food packages, she was overjoyed. She hadn’t received this kind of help or generosity from anyone.

After the team fixed things around her house, they shared about who they were and why they do what they do. “We told her our aim is to show God’s love and tell everyone about Him,” explained our partner. “She was very open since she was from a Christian background.”

They spent time praying for her and when it was done she cried, “Your prayer is so beautiful from the heart. I don’t deserve it. I’m so far away from God and I’m not a good person. I don’t talk to Him or anything. But sometimes I look up and speak to Him but I don’t feel He listens to me.”

“God is close to you and He loves you,” they reassured her. “He has been taking care of you. Whatever you say, He listens to you. Keep talking and praying to Him.”

Anna was so touched that she invited the team to come back another time. Once they left, she sent them a voice note saying, “I want to thank you all from the bottom of my heart. Thank you for thinking about us and helping us. I’m so happy that everything in the food pack was what I really needed.”

The team has done 450 connections so far with the number expected to reach our 500 families target in the coming week. By early September, have visited 320 homes of the 420, blessing the people and providing repairs, food packs, medicine and the message of hope in a loving God who truly loves and cares for them. Of those they visited and blessed, 13 people made the decision to commit their lives to Jesus.

Will you partner with us so that we can do more to reveal hope and restore life for those who have been affected?