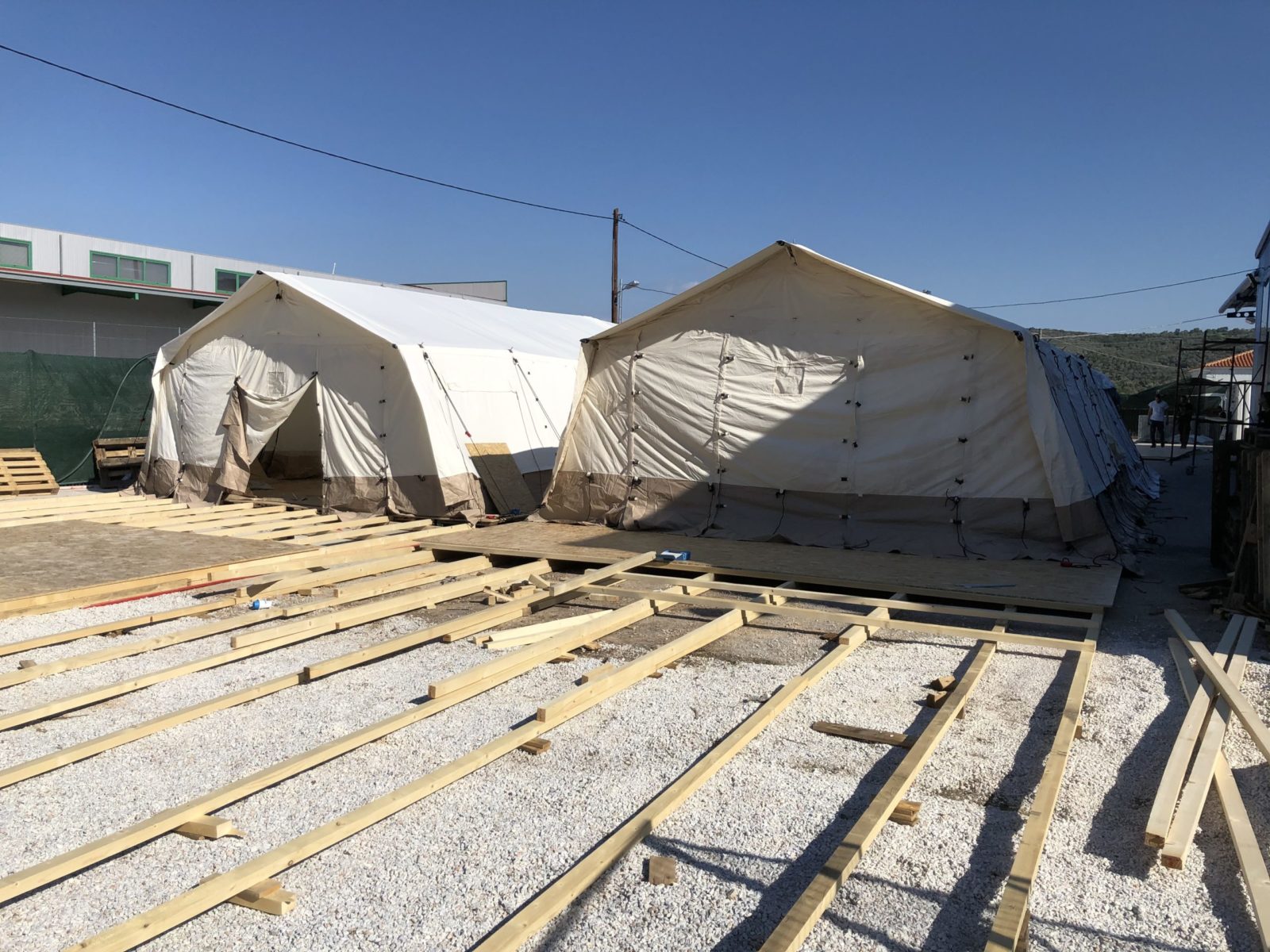 Global Aid Network (GAiN) sent a DART (Disaster Assistance Response Team) to Lesbos, Greece to spend two months at Camp Moria. One of their projects was to rebuild a structure that had burned down in March 2020. Because of a shortage of volunteers, due to COVID-19, the DART team helped rebuild the structure (called Level Two).

Below is a story written by Melinda, a DART member:

As soon as we start working a crowd of kids starts gathering and wants to help. Men and women walk by, either giving us curious looks or asking in, more or less, broken English what we are doing.

A few weeks to rebuild two burnt structures in camp.

The fire happened two months ago and a lot of families lost their shelter. The families that lived inside the two isoboxes but also the families living in self-built structures around it. One child lost its life.

Omar*, a 15 year old boy from Afghanistan lives with his mother and siblings only a few meters down from where the fire happened. He tells me that the fire broke out in the morning. An accident. The mother of the little child was standing in the food line to get breakfast for them when the fire started. Her husband was already in Germany and the two of them on their long journey to reunite with him. But the reunion of the father with his little child will never happen. The little one died in the fire.

Omar also tells me that the fire truck couldn’t even make its way to the location. The paths in camp are too narrow for a big fire truck. Women and children were running away from the fire while men were bringing water to extinguish the flames. It is a miracle that the fire was stopped by buckets of water. The trees standing around still have black trunks.

A few families have already built new structures around the burnt skeleton of an isobox. Even though the land is valuable no one has settled inside the left behind ash-black beams. Local NGOs had to fight for that. Now no family has to be told to remove their shelters while we are rebuilding.

“Do you think it is good that we are rebuilding the isoboxes?”

“Yes!” Omar says. “Then families can move here from the jungle,” as the olive groves around the official camp are called. “That’s good. They will even have a shared bathroom and electricity here.”

Omar helps us today scraping off the bubbled paint and soot off the beams. He’s excited to be able to help and also practice his English with us. During lunch a beautiful woman comes and brings us Afghani pastries. Kids and adults tell us thank you for doing the work and rebuilding.

We feel well taken care of.

“Will you be back tomorrow?”

In addition to rebuilding the burnt structure, the DART team also built an isolation station for potential COVID patients to quarantine, in the event of an outbreak at the camp.

Melinda shared a few thoughts just before the station was about to open:

The isolation station from MSF (Doctors Without Borders) is now officially ready to be opened. As we drop off the last few things for the ‘isolation kits’ every patient will get upon arrival, a group of 15 cleaners is roaming around, sweeping up the last sawdust and picking up the last bits and pieces that show that up.

Until today, this place was a full-on construction site. The electricians fix the last light switches, the water tanks get filled with water, the project manager is on the phone and looks tired, stressed, but still content. While all of this happens, medical personnel get their tours in groups of 15, do a walk through from low risk area to high risk area, walk into the changing rooms and take a look at the wash facilities for the future patients. It feels like a buzzing beehive.

Tomorrow is the opening. And while people are excited that everything seems to be done in time, the hope is that this facility will never have to be used. Or at least never to its full capacity. That only very few of the isolation kits will ever be handed out. The paradox of building a corona isolation facility: putting in so much work under time pressure with the hope and prayer that it will never be needed.