GIVE THE GIFT OF LIFE THIS CHRISTMAS!

This year, share joy, peace and hope with those living in poverty, injustice and crisis around the world. Click here to view the gifts. 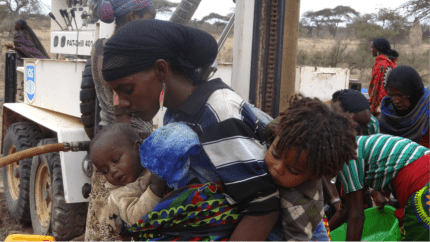 A REMINDER OF GOD’S GOODNESS FOUND IN A TANZANIAN VILLAGE

In awe of the sheer magnitude of people, the team was introduced to the chairman of the borehole committee. As Bill talked with him, the chairman shared that thousands of people came from surrounding villages to get their clean water in Kikwetu, resulting in approximately 4,000 people utilizing this one water well.

After casually talking to the chairman for 15 minutes, the man leaned over and nonchalantly said, “Would you like to meet my son?”

Bill agreed and the man walked over to his wife, who was standing in the line for water. He lifted his three-month old baby out of her arms and said, “You know…I so love what GAiN stands for; the work they do and the impact that they have. Because of what they have demonstrated to us, I have chosen to name my first son ‘Gain’. I gave him that name at birth, because every time I look at him I want to be reminded of the tremendous work that GAiN has done for my people. And when he hears his name “Gain”, he will know that is stands for both the goodness of the Lord and all the good things that one can do for people.”

The chairman continued to share that so many blessings had come to the village since GAiN had drilled the well on March 3, 2009. He had become a Christian, along with five others, through the JESUS Film that was shown to 327 people on June 15, 2009, several others in the village had made decisions to follow Christ through the church that was planted shortly after, and the village was better off in terms of health, hope and many other areas.

“I could not help but be humbled,” shares Bill. “I saw the direct impact of GAiN’s work. This was very significant! We came alongside a community of people and helped provide for their needs, both physically and spiritually.”

As the three left Kikwetu, they wereonce again reminded  that it is not always about statistics, but it is about people. People such as ‘Gain’ that will forever be part of that village’s history as well as serve as a testimony of God’s transforming power, through GAiN, to others in their community and in their surrounding villages.